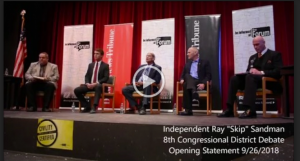 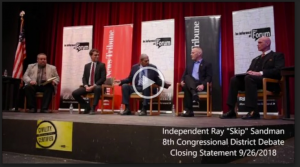 Statement on Sexual Assault and the Kavanaugh Nomination

As a person who has been taught to respect women and regard them as sacred, it is alarming to see the mentality on sexual assault being regarded as “boys will be boys.” This perspective evades responsibility of sexual abuse perpetrators for horrendous acts and minimizes the effect that the abuse has on victims of this sexual assault. This type of mentality is very unhealthy, and the way it is spreading throughout America is only creating a culture that accepts this abuse and will only perpetuate more abuse. We need to shift this back to the place where women are regarded with the respect they deserve and honored. Holding abusers accountable for their actions and centering our mainstream perspectives to that which deems sexual assault as inexcusable, something not to be brushed off, is important.

In the vetting process of Judge Kavanaugh for his appointment to the Supreme Court, I feel that the two women who have accused him of sexual misconduct should have these accusations investigated by the FBI before any confirmation process happens. Every woman has the right to step forward and have her story heard. If they can hold Bill Cosby accountable for his past actions dating back 35 years, the Supreme Court nominee should also be investigated. I would like to call on Americans to examine their perspectives on how women are being treated to this day in 2018. It is a throwback into the past of selective male values. It’s appalling to me that certain men in 2018 still marginalize women as a whole. 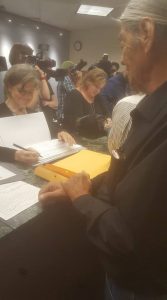 Ray “Skip” Sandman formally filed to run for Congress with the Minnesota Secretary of State on Tuesday.  Mr. Sandman, the endorsed candidate of the Independence Party of MN, had this to say after.

“We have filed our Affidavit of Candidacy with the Secretary of State and presented the clerk with roughly 1400 petition signatures nominating me to be on the November 6 ballot for the 8th CD seat. Minor Party and Independent Congressional Candidates are required to produce 1000 signatures of district residents that are eligible to vote.

I am humbled by those wishing to see me on the ballot and grateful to the 40 volunteers who promoted the petition. The volunteers’ exuberance in gathering signatures produced a 40 percent surplus and we are confident that The Secretary of State will be validating our candidacy by early next week.

The voters of this district deserve another choice on the ballot besides proponents of ‘politics as usual ‘and feeble ‘free-market’ solutions to our failing economy. Our campaign is determined to show in the coming months that Skip Sandman is worthy of their vote.

We also welcome to the race Mr. Welty, and Mr. Sorenson, and wish them the best of luck in their respective primaries. “

Today, Skip Sandman promoted one of his current campaign team, Terri Mathews, to take the position of Campaign Manager. “Up to this point our campaign has run effectively enough, but it has become clear that some roles needed to be better defined as we follow the path to victory in November. Terri shares my values, has shown amazing leadership skills and is a great organizer. She has my utmost confidence and the respect of the entire team.” Sandman said. 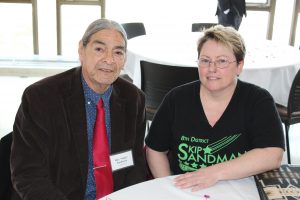 Ms Mathews from Mahtowa, MN commented.   “As a citizen of the United States, I have watched our system of government being corrupted by our current administration. I felt I had no choice but to re-enter the political area in some capacity. As a female with a masters degree in public policy, I know I can make a difference for others. After much deliberation, I have accepted the position of Campaign Manager with the Sandman for Congress Campaign. I chose Skip Sandman’s campaign because he is not beholden to either of the two major parties. Neither of whom have found a way to help those who need it the most in our society. With Skip, we have a rare opportunity to take back our power and find our voices again as Minnesotans and US citizens against a system that is only working for the very wealthy. I need you to join me in supporting Skip Sandman for our next 8th District Representative from our amazing state of Minnesota.”

DULUTH — The political pairing of Ray “Skip” Sandman and the state Independence Party came together over coffee at a roadside restaurant in Hinckley. What started as an introductory get-together yielded a match which will carry into the 8th Congressional District race. Sandman, 64, is making his second bid for the office after running as a Green Party candidate during the 2014 8th District race.

“He contacted us in early January and said that he was interested in joining the party,” said Phil Fuehrer, chairman of the Independence Party of Minnesota based in St. Paul. “I’m not terribly interested in poaching folks from other third parties, but if he felt the fit was not there then, sure, I’m more than happy to welcome him on board.”

Sandman garnered 4.3 percent of the vote in 2014, or close to 11,500 votes, in a race won by retiring three-time incumbent Rep. Rick Nolan, DFL-Crosby. Sandman skipped the 2016 race after receiving an artificial heart valve. When he announced his candidacy last spring, he did so as an independent in search of a new party

My condolences go out to the families and friends who suffered this senseless and needless tragedy that occurred at yet another one of our country’s schools, this time in Parkland Florida, is one more mass shooting that could have and should have been avoided by common sense legislation enacted by our elected representatives. As a country we have kicked this can down the road long enough. When do we say as a nation enough is enough? It is long past time that congress does the job of the American people and not the bidding of the NRA. I call on congress to act now and enact legislation to end the gun violence which is a uniquely American problem. 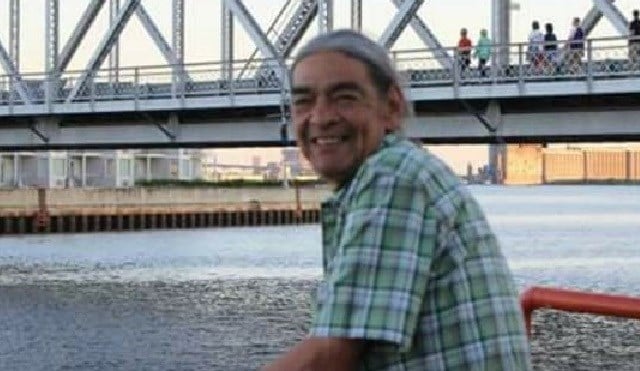 Vietnam veteran Ray “Skip” Sandman, 64, has officially received the endorsement from the Independence Party of Minnesota as he pursues the 8th Congressional District seat. This comes just days after current 8th Dist. Congressman Rick Nolan (DFL) announced he will be retiring at the end of his term, paving the way for a hotly contested race from now until November.

In response to the endorsement, Sandman says:

“I proudly accept the Minnesota Independence Party’s endorsement and look forward to offering the voters in my district a choice for real representation. For too long, the candidates of the two major parties have taken the people of the eighth for granted and have chosen to represent the interests of corporations and their wealthy donors.  Our shared centrist vision of valuing the people and the planet before profits will insure that we all will prosper. Investment in our students means that business will flourish, technology will continue to provide productivity and energy savings. Also, a more equitable distribution of our commonwealth will create a more sustainable society. This is my common-sense approach to politics.”

Sandman announced his candidacy for the 8th Dist. seat in May of 2017.

Skip’s comments to the MN DNR  about denying a permit to mine to Polymet. (February 8, 2018: Duluth, MN)

“My name is Skip Sandman, I live right here in Duluth, downstream of Polymet. Maintaining our clean water is a necessity for our physical health, and our economic health. It is our responsibility to fight for our children and their right to clean water, to fish from and enjoy this beautiful Lake Superior that is in our own back yard. 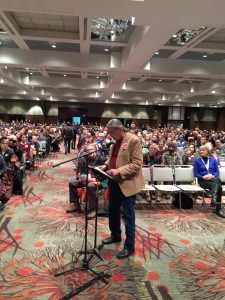 The Polymet mine is the largest new threat to our region’s supply of fresh water. To mine copper-sulfide ore, the metals need to be separated by finely crushing sulfide bearing rock.  When exposed, the sulfides create acid which leaches several heavy metals, such as mercury and lead from the remaining waste rock. These heavy metals then need to be contained to prevent them from getting into our air and water.  When the containment fails, and it will… because they all have leaks, besides heavy metals, sulfates are released and converted into methyl mercury in rivers and enter our bodies when we eat fish from contaminated rivers. One in ten newborns in the Lake Superior Basin ALREADY have unsafe levels of mercury in their blood, we simply cannot risk adding more mercury into our environment.

Polymet plans to place a 250 ft tall earthen dam on top of the existing LTV tailings pond to contain the toxins it produces. They believe that this containment will last for hundreds of years. Over those hundreds of years, it would be nearly impossible to prevent catastrophic failure of the containment and the pollution would work its way down the St. Louis River. Additionally, any environmental safeguards will be expensive to maintain and will be abandoned eventually by Polymet after they close their mine. It should be crystal clear to all of us, that we will be left to deal with the mess. We cannot trust these companies to simply do the right thing on their own. Plus, the current political power in Washington DC and in St Paul is bent on eliminating environmental regulations and handcuffing our enforcement agents. Therefore nobody will be left to force them to keep our water clean either. Our best approach would be to never let Polymet begin mining.

Polymet has been preying upon our desperate workforce and offering them elusive jobs… a carrot on a stick.  So, let us all fully understand that the primary motivation of these multi-national mining corporations is not to provide good jobs, it is to make profits, and the more profit, the better it is for their company. They have no intention of providing good paying jobs. Polymet has never said what their lowest hourly wage will be. They will wave that stick and point to an average annual salary without clarifying whether one miner will have to work 50 hours a week to get $30 thousand a year while their CEO gets $30 million. It is a huge assumption that these will be good paying jobs. They will always use that carrot on a stick to blackmail all of us to go along with their looming environmental disaster.   It is in the best interests of all Minnesotans, including Iron Range miners,  that a Permit to Mine, be denied to Polymet.”